Congratulations to the finalists of The Image of Research competition!

Robin Holland from Microbiology for “Discover What’s Inside”

Why pursue research? I am driven by discovery, the idea that I am exploring questions that have no answers, and seeing what has never been seen. Inside each of our cells there hides a beautiful network of energy generating powerhouses, the mitochondria. These organelles are intricately involved in a vast number of cellular processes, being a structure necessary for life. Although these organelles have been with us a long time (hypothesized 1.5 billion years), we have much to discover about what they are and what they do. Being necessary for life, some pathogenic bacteria have evolved to target their ancient ancestor to disrupt cellular function and promote infection. My research is investigating how a bacterial toxin disrupts mitochondrial function. For a large part of my work, seeing is believing. I have imaged thousands of cells, looking at mitochondrial structure, and sometimes, if I look closely, I can see the mitochondria spelling out what it is that I love to do, discover. Each letter of the word discover is a single mitochondrion imaged by fluorescence microscopy, with the cell they came from below each letter. Not only do I believe what I see inside these cells, but I love it.

Aadeel Akhtar from Neuroscience for “Bionic” 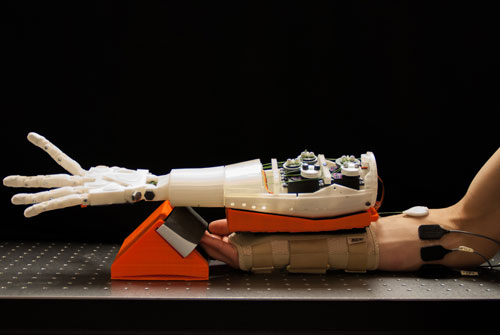 Our research involves providing sensory feedback to people with upper limb loss. In this photograph, we have an unimpaired subject testing our low-cost, 3D-printed skin stretch mechanism to provide people with upper limb loss a way to know the location of their fingers without having to constantly look at it. The user can move the fingers on his prosthesis myoelectrically--through the use of sensors that measure the electrical activity from his muscles. Upon moving a finger, a small contact pad adhered to the skin and mechanically coupled to the fingers motor via a fishing line will stretch the skin an amount proportional to the angle of the finger. The lack of this joint-location sense, known as proprioception, is one of the leading causes of prosthesis abandonment. Through this skin stretch mechanism, we give proprioception back to the user in a way that is inexpensive, energy efficient, small, simple, and intuitive. Due to its simplicity and inexpensiveness, we can apply this mechanism to any existing myoelectric prosthesis, and have plans to integrate it with prostheses not only in the US, but in developing countries as well.

What is complexity? A complex shape or complex data might be organized across many scales, perhaps with larger structures repeated at smaller scales, as in fractals. Or it may have order hidden within apparent randomness - a chaotic system.  A system producing complex data may be more flexible or adaptable than one that can only produce simple data. Many physiological systems show complex behavior, whose complexity can change with aging or disease.  For muscles, the ability to adapt complexity of output to meet changing goals might predict how well a new task is learned. I study how complexity of initial performance predicts learning of new tasks with lip and tongue muscles in healthy younger and older adults. Eventually, this work may lead to better therapies for people with difficulties swallowing or speaking. The patterns overlain on the tongue and lips in the image are magnified sections of the Mandelbrot set, a well-known fractal. The overall shape references the famous "butterfly effect" from the earliest studies of chaos in weather, while the title alludes to Sir Terry Pratchett’s explanation of why scientists really study chaos (Witches Abroad).

Maksym Bobrovskyy from Microbiology for “Behind the Scenes” 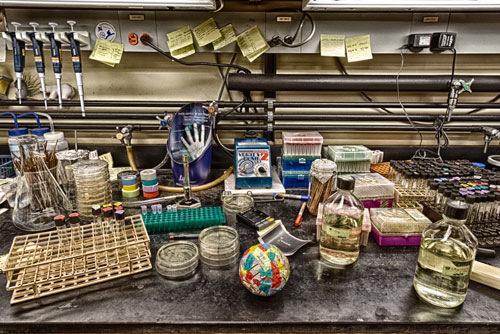 Research findings get published to benefit other scientists, but what happens during the process of scientific investigation stays behind the closed doors of the lab. This photograph provides a glimpse of microbiology students everyday life. The laboratory bench is where experiments fail and big discoveries are made. Here, on this photograph you can see various glass tubes labeled with colored tape, pipettes, flasks, petri dishes and bunch of post-it notes. One interesting object is the ball entirely made out of colored tape labels that I used through out six years of graduate school; a measure of productivity of sorts. At the molecular level, biology of bacteria is complex and at times, just like this lab bench, may seem chaotic and disorganized. However, everything must have its dedicated role, so at this bench I study how bacterial cells regulate gene expression in order to modify their metabolism in response to environmental stress. In particular, I study bacterial small regulatory ribonucleic acids (sRNAs) that can mediate gene expression creating a different level of regulation in the cell.

Katherine Godwin from History “The Fragility of History” 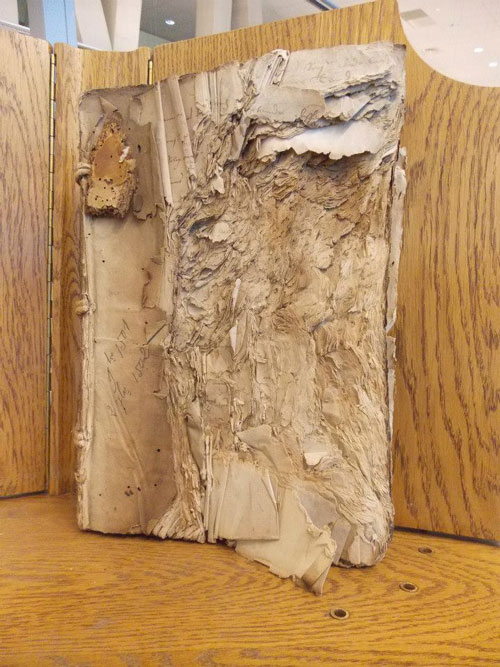 This image is of a bound set of court records from 1501-1502 in Rouen, France. It has been badly damaged by insects and is a sobering reminder of how easy it is to lose the materials we rely on to interpret the past and make sense of our present. It forces us to continually question how representative our evidence is and to take steps to preserve what we have. Court records from Rouen, like these, make up the core of my research into daily life and legal culture in the early 1500s in France. They reveal how ordinary people mobilized resources and contributed to the development of the state's institutions. 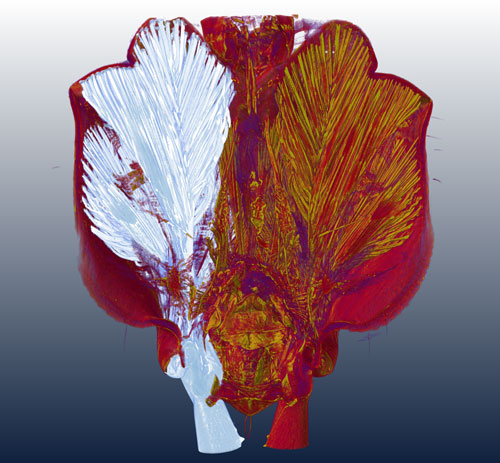 Animals use a diverse combination of mechanical components, such as levers, springs, and linkages, to power the behaviors that fascinate and inspire nature lovers. Trap-jaw ants, my study system, use a catapult mechanism to snap their long, spring-loaded mandibles shut at some of the fastest speeds ever recorded for an animal movement. Even though this behavior is most commonly used to capture prey, when trap-jaw ants are themselves attacked by other predators they aim their strikes at the substrate to jump away from danger. I am interested in how trap-jaw ants achieve these record-breaking speeds and how they have evolved over time. This image was generated using X-Ray Microtomography and reveals the internal anatomy of a trap-jaw ant head. By examining morphology, it is possible to infer the mechanism of the trap-jaw apparatus. A latch keeps the mandibles open even when the large mandible closer muscle (highlighted) contracts, allowing potential energy to be stored until a specialized trigger muscle releases the latch and the mandibles instantaneously accelerate shut. The relative size of the closer muscle is particularly clear in this image; it takes up almost the entire volume of the head.

Ly Dinh from Communication for “Visualizing the Flow of Knowledge” 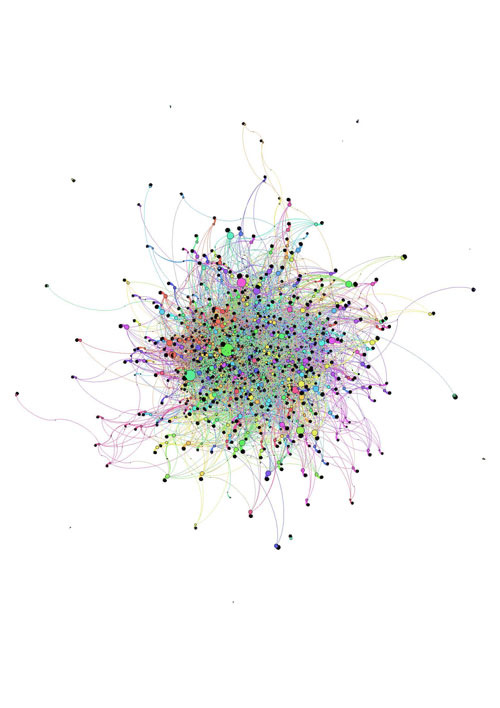 Within the field of computer-mediated communication, an increasingly popular domain for researching online social networks, visualizing citation linkages can help discover the most influential journal articles, most well connected author and emerging sub-groups of topics in the network. The present visualization chooses to examine paper citation and co-authorship patterns in Journal of Computer-Mediated Communication (JCMC) to recognize the substantial role the publication plays in adding network analysis to the communication literature. In fact, social and semantic network analysis enables communication scholars to understand how the adoption and use of new CMC systems impact social processes, specifically affordances and constraints of introducing new technologies to various contexts such as organizations and interpersonal relationships. Thus, understanding how knowledge flows, which authors have highest influence, and the various sub-specialties and sub-groups of authors emergent are essential to capture the evolution of the CMC field since 2005 as well as the frequency and impact of network analysis in the literature. The following visualization contains 459 articles and 17,909 nodes of works that are referenced between all articles and directed edges represent instances of citing. Software used are NodeXL, Gephi, and Sci2.

The Image of Research is a multidisciplinary competition celebrating the diversity and breadth of graduate student research at the University of Illinois at Urbana-Champaign. Entries were judged by a multidisciplinary panel for connection between image, text, and research; originality, and visual impact.

“The review committee was thrilled to engage with 98 examples of the innovative and exciting research being conducted by graduate students on our campus,” says Cara Finnegan, associate dean in the Graduate College and member of the judging panel. “We were impressed by the students’ deep passion for their work as well as the skill and creativity with which they depicted their research visually.”
The winners were announced at a reception on Wednesday, April 8, where the entries of twenty-five semi-finalists were on display. Attendees voted for the People’s Choice Award. All of the 2015-2016 submissions will soon be on display in IDEALS. See The Image of Research website for more details at http://publish.illinois.edu/imageofresearch/.
The Image of Research is organized by the Scholarly Commons of the University Library and the Graduate College and is supported by a generous gift to the Scholarly Commons from the Division of Intercollegiate Athletics.