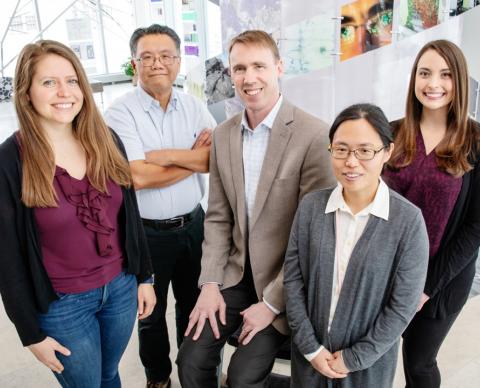 CHAMPAIGN, Ill. — A new web tool speeds the discovery of drugs to kill Gram-negative bacteria, which are responsible for the vast majority of antibiotic-resistant infections and deaths. The tool also offers insights into discrete chemical changes that can convert drugs that kill other bacteria into drugs to fight Gram-negative infections. The team proved the system works by modifying a Gram-positive drug and testing it against three different Gram-negative bacterial culprits in mouse sepsis. The drug was successful against each.

Researchers report their findings in the journal Nature Microbiology.

“It’s really hard to find new antibiotics for Gram-negative pathogens, because these bacteria have an extra membrane, an outer membrane, that’s very good at keeping antibiotics out,” said University of Illinois chemistry professor Paul Hergenrother, who led the research.

The challenge is so profound that no new classes of drugs to fight Gram-negative bacteria have been approved by the Food and Drug Administration in 50 years, Hergenrother said.

“A few years ago, we discovered the molecular features that allowed an antibiotic compound to surpass this barrier,” he said. “Now, we’ve developed a tool to help others do this as well.”

The new app, called eNTRyway, can quickly evaluate potential drug compounds to determine if they have the molecular characteristics that will enable them to cross the membrane and accumulate inside Gram-negative bacteria.

Developed by graduate student Bryon Drown, the app also can point to ways of modifying existing drugs – for example, those known to work against Gram-positive bacteria – to convert them into potent killers of Gram-negative pathogens.

As a demonstration of this latter capability, postdoctoral researcher and study co-lead author Erica Parker used the tool to identify a drug already in use against Gram-positive infections that – with a basic chemical modification – could potentially be converted to fight Gram-negative bacteria. By adding a positively charged chemical group known as an amine to the drug, Parker created a compound that, further tests revealed, accumulated in Gram-negative bacteria and was effective against several types of Gram-negative infections in mice.

The process of identifying the compound and modifying it took only a few weeks, Hergenrother said.

“Keep in mind that before this, over 100 derivatives of this same compound had been made. We found them in patents and papers,” he said. “And none of these other derivatives had notable Gram-negative activity.”

Hergenrother and his colleagues have so far identified more than 60 antibiotics that are effective only against Gram-positive bacteria but can be converted into drugs to fight Gram-negative infections. These compounds kill bacteria in a variety of different ways. The newly created drug, known as Debio-1452-NH3, interferes with fatty acid synthesis in bacterial – but not mammalian – cells.

Hergenrother said the new tool will speed the process of drug discovery to fight the burgeoning problem of antibiotic-resistant infections.

“We can use this tool to rapidly identify compounds that accumulate in Gram-negative bacteria,” he said.

The National Institutes of Health supported this research.

Hergenrother is an affiliate of the Carl R. Woese Institute for Genomic Biology at the U. of I., where he leads the Anticancer Discovery from Pets to People theme.

The paper “Implementation of permeation rules leads to a FabI inhibitor with activity against Gram-negative pathogens” is available online and from the U. of I. News Bureau.