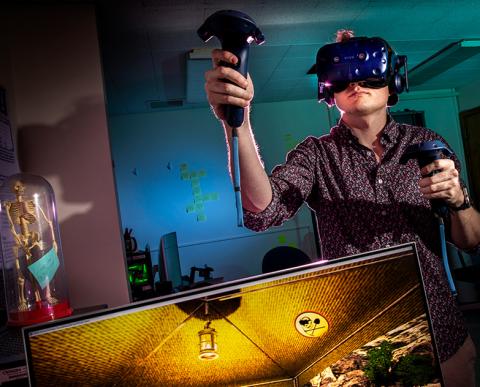 Before they can get started at their field site – a giant cave studded with stalactites, stalagmites and human artifacts – 15 undergraduate students must figure out how to use their virtual hands and tools. They also must learn to teleport.

This is ANTH 399, a course designed to bring the archaeological field school experience to undergraduate students who never leave campus. Designed by University of Illinois professors and computer science graduate students, the course satisfies the field school requirement for those pursuing an archaeology degree at Illinois.

“Field school is a requirement of most archaeological programs across the country,” said Illinois anthropology professor Laura Shackelford, who led development of the class with U. of I. education policy, organization and leadership professor Wenhao David Huang and computer science graduate student Cameron Merrill. “But traveling to a field school site can cost anywhere from $500 to $5,000.”

This, and the fact that traditional field school expeditions are often scheduled during breaks, makes it difficult or impossible for many students to attend – cutting them off from the study of archaeology altogether.

“This class makes it possible for many more students to get an education or explore a career in archaeology,” Shackelford said. The class is also accessible to students with physical limitations who are unable to travel to or navigate a field site.

The virtual cave is modeled in part on a real cave that was excavated in the 1930s. It contains both ancient and more recent human artifacts, all of which are accessible to students who dig in the right place.

The students learn the archaeological techniques required in any excavation. They set up a research grid on the cave floor and systematically locate and record any artifacts they find on the surface. They draw a map with all of the surface details and then decide where to excavate. They take photos of special features or finds. They dig. They collect artifacts. They conduct laboratory analyses. They keep track of their progress in a field notebook.

All of these tasks are accomplished in the virtual world.

Building this virtual archaeological experience is a computational and creative challenge, said computer science graduate student Merrill, the lead programmer on the project. This class is his doctoral thesis.

“You can’t just import lectures into VR and expect to have good results,” Merrill said. “We’re not creating a 3D model viewer for looking at artifacts or to tour an existing site. We’re trying to build an immersive educational experience.”

Students need to feel they are actually engaged in excavating a cave, he said. It’s also important for them to use realistic tools to accomplish the tasks at hand.

But designing virtual tools for an archaeological dig is tricky, Merrill said.

“A lot of the challenge has to do with the trade-off between making something as realistic as possible versus making something more accessible to people,” he said. For example, the designers created a virtual tape measure that requires two hands to operate. But reading tiny measurements in the virtual world is problematic, so a pop-up screen shows the user the readout on the tape.

Virtual digging was another challenge.

“We needed to simulate dirt that the students can modify in real time,” Merrill said. “But simulating something like soil is very computationally complex.”

The team came up with a solution that allows students to extract the dirt in chunks that reflect the light in a realistic manner. The design also incorporates haptic feedback, so that students can “feel” the solidity and texture of the dirt when they make contact.

The team uses insights from game design to engage the students, Shackelford said.

“We’re giving them less instruction and providing multiple scenarios,” she said. “And so it’s possible different teams of students will experience different things.”

The students choose where to dig, which influences the information they gather – or miss, Shackelford said. And there are risks, too. Dig too far into a wall and it might collapse.

In the first iteration of the class held last year, students gave the designers immediate feedback about how the tools worked or didn’t work, allowing Merrill and his colleagues to tweak them. He and his colleagues have created more than 110 artifacts, many of which are virtual versions of actual relics in the university’s collections.

“When we want them to learn how to do some ceramic analysis and sorting, we’ll bring the real things to class and they’ll be going back and forth between the real and virtual worlds,” Shackelford said.

The students work in pairs, taking turns in the virtual world while their partner guides them, following their progress on a computer monitor and stopping them from bumping into any real-world objects. The excavations lead to laboratory work, which also occurs in the virtual realm, Shackelford said.

They also learn stratigraphy, the art of reading how layers of soil were deposited over time.

“The pattern and the timing of that deposition of soil tells us a lot about how a site was formed, Shackelford said.

The team is evaluating the efficacy of the program to determine if the skills the students learn are equivalent to those obtained in a real-world dig. In the earlier version of the class, professors took the students to a real-world “mock excavation” site near campus at the end of the semester. This site allowed the students to excavate in real dirt, testing their VR-acquired skills and understanding.

“We found that a lot of things that were frustrating for students in the virtual reality world were just as frustrating in the real world,” Shackelford said. “And with a little practice and self-correction, they were able to do everything that we asked them to.”

The researchers presented VRchaeology to an audience of anthropologists at the 2020 meeting of the Society for Historical Archaeology in Boston. Shackelford also is a professor in the Carle Illinois College of Medicine.