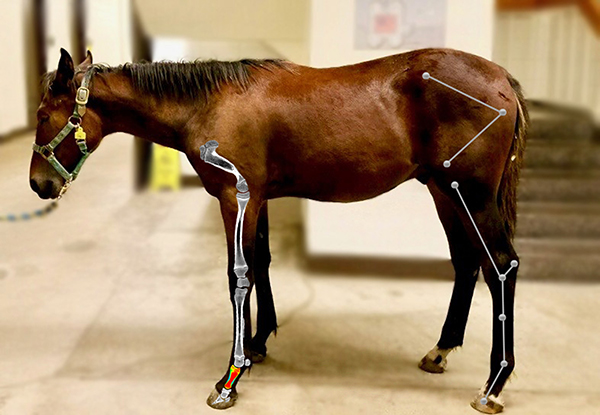 Ever wondered why horses have difficulty recovering from broken legs? Because they don’t have hands to use crutches! Horses weigh so much that they can only lay down for a few hours at a time, and standing on three legs for a long period of time causes other issues. A leading cause of fatality in sport horses (think jumpers and race horses) is fracture to a leg bone. Few of these fractures can be fixed. Understanding how bone grows and strengthens can help us better understand the fracture of such bones. My research looks at a specific lower leg bone, the proximal phalanx (the colorful bone), and how this bone grows during the first year of a horse’s life. Specifically, I am investigating whether the bone changes how it handles loads during growth. To do this, Illini Cyclone (the horse pictured) undergoes CT scans every few months. We also collect information on how he walks, so we can model the bone correctly (markers on back leg). The ultimate goal of this project is to propose a training strategy to horse trainers that lowers the likelihood of proximal phalanx fracture, saving as many horses as possible from an untimely demise. 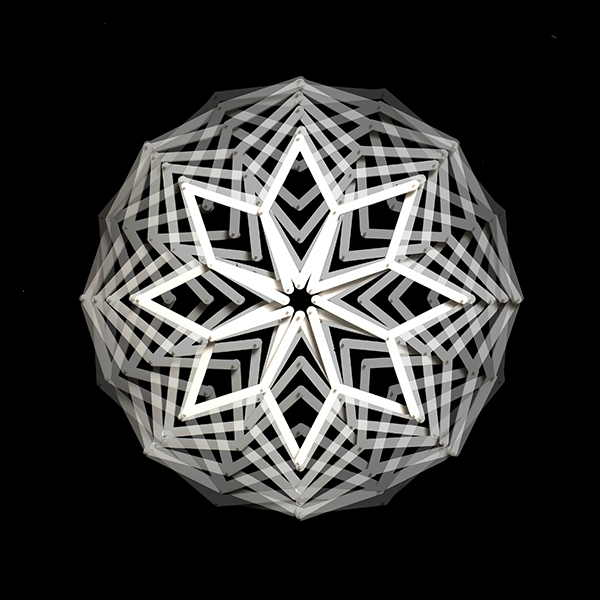 As an architecture student, I am trained to think about structures made of concrete, steel and wood. The structures I designed were typically static, i.e. motionless, until I came across a whole new world of kinetic structures. I learned that almost any form can be given mobility and deployed by calculating its geometry accurately and by strategically selecting the joints to allow rotation. As the first exercise in my graduate Structures course, I was asked to design an eight-sided expandable ring using scissor type units. The image shows the radial deployment and kinematic trajectory of the ring from the top view. It captures the intermediate position of the members and joints during motion. During radial motion, the position of the joints become more difficult to predict. This is called position analysis which is the fundamental step to more advanced mobility analysis of deployable structures. This project triggered my interest to researching about more complex deployable forms and thinking of how to apply them to the design of buildings. I am currently working on the design of emergency shelters using this kind of structures, which are light-weight, transportable and are rapidly deployable. 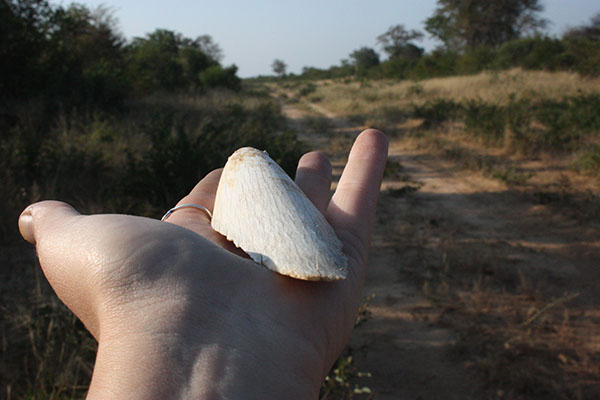 In 2017, it was estimated that there are less than a quarter of the expected number of elephants in Africa’s protected areas, yet poaching for ivory is a persisting pandemic. I picked up this piece of ivory, that had naturally chipped off the tip of an elephant tusk, while doing fieldwork in Botswana. In monetary value, I would guess that it was worth about U$500, but to some the value of this piece of ivory could falsely mean life or death. Luckily, it seems that the use of ivory for medicinal and recreational purposes has become less popular as more countries ban the use and trade of ivory. My PhD research focusses on finding long term conservation solutions for elephants in southern Africa. I use genetic and ecological methods in an integrative way to find conservation strategies that could hopefully assuage some the negative consequences of poaching. After photographing this piece of ivory, I threw it as far back into the bush as I could, nobody in this world needs an elephant tusk but an elephant. Camera: Canon EOS 450D, lens Canon EFS 18-55mm. 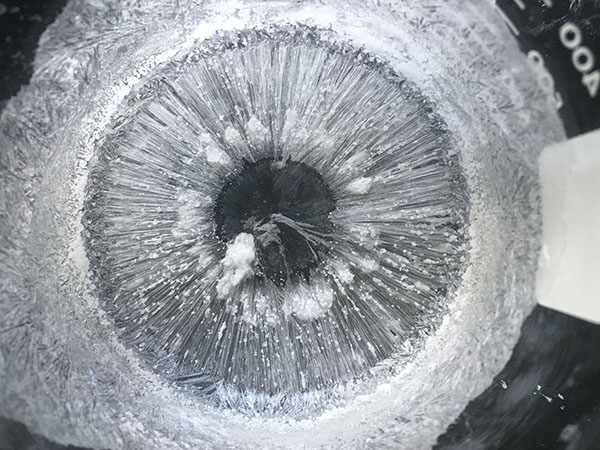 When one engages in research, we transition, from being a gatherer of knowledge, to a creator of knowledge. The process of research by its very nature pushes its explorers to question dogmas and pioneer new fields, and rewards those with a careful and observant eye. History has shown us that the greatest scientific discoveries often arise from simple observations made by diligent and curious individuals, observations that were overlooked by others blinded by expectations, predictions, and assumptions. The above image is far from any monumental discovery, only the crystallized remains of a salty solution in a beaker left aside and forgotten. Albeit insignificant, something as simple as a disregarded beaker can still remind us to always be watching for an unexpected finding in the most unexpected of places, and that anything can give rise to little moments of beauty, but only if we are willing to look and see what science is showing us. 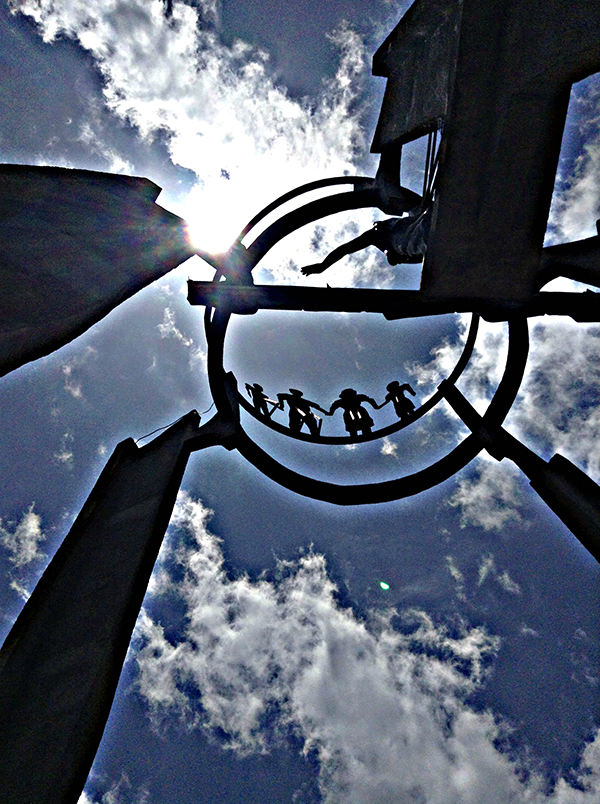 Do you remember me? What do you remember? How do you remember? This image is indicative of my affective results and reflections from my graduate research. My research focuses on Salvadorans and their disappeared family members during the country’s civil war. Throughout my research, I investigated values and meanings of family, material and/or oral representations of disappeared family members, and the temporal connections to memory and history. Throughout my research in ElSalvador, I visited many sites of collective and historic memory, sites where the victims of the disappeared exemplified their connections to remembrance and the body. For this image, the heteronormative family was iconic: it was significant to have the mother, the father, and the two children – for they were confirmations of a world, memory, family, and relationship as complete. Not only was the presence of family essential, but the accompanying regard of faith or a “holy being” was consistent as well. To consider the situation as heavenly or miraculous created an influential visibility onto the many narratives that were forcibly erased. It was the combination of hope and togetherness that pushed for a societal resistance of keeping the disappeared, alive.

The Image of Research is a multidisciplinary competition celebrating the diversity and breadth of graduate student research at the University of Illinois at Urbana-Champaign. Entries were judged by a multidisciplinary panel for connection between image, text, and research; originality, and visual impact. The winners were announced at a reception on Wednesday, April 4, where the entries of twenty-five semi-finalists were on display. Attendees voted for the People’s Choice Award. All of the 2018-2019 submissions will soon be on display in IDEALS. See The Image of Research website for more details at http://publish.illinois.edu/imageofresearch/. You can view a full gallery of the semi-finalists on Instagram at https://www.instagram.com/gradlifeil/.