Congratulations to the 2021 Image of Research Winners! 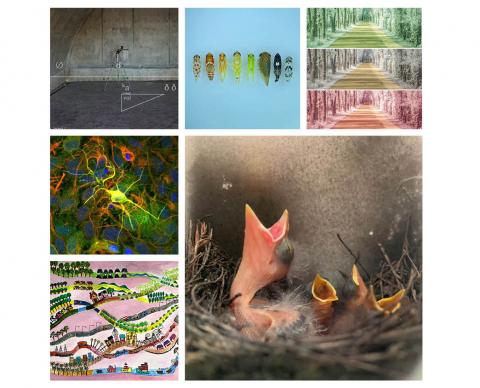 Thank you to every graduate student who entered, the semifinalists, our panel of judges, visitors to the online exhibition, and those who voted in the People's Choice competition.

The 2021 Image of Research winners are:

Fracas at the Nest  by Nick Antonson from Evolution, Ecology, and Behavior 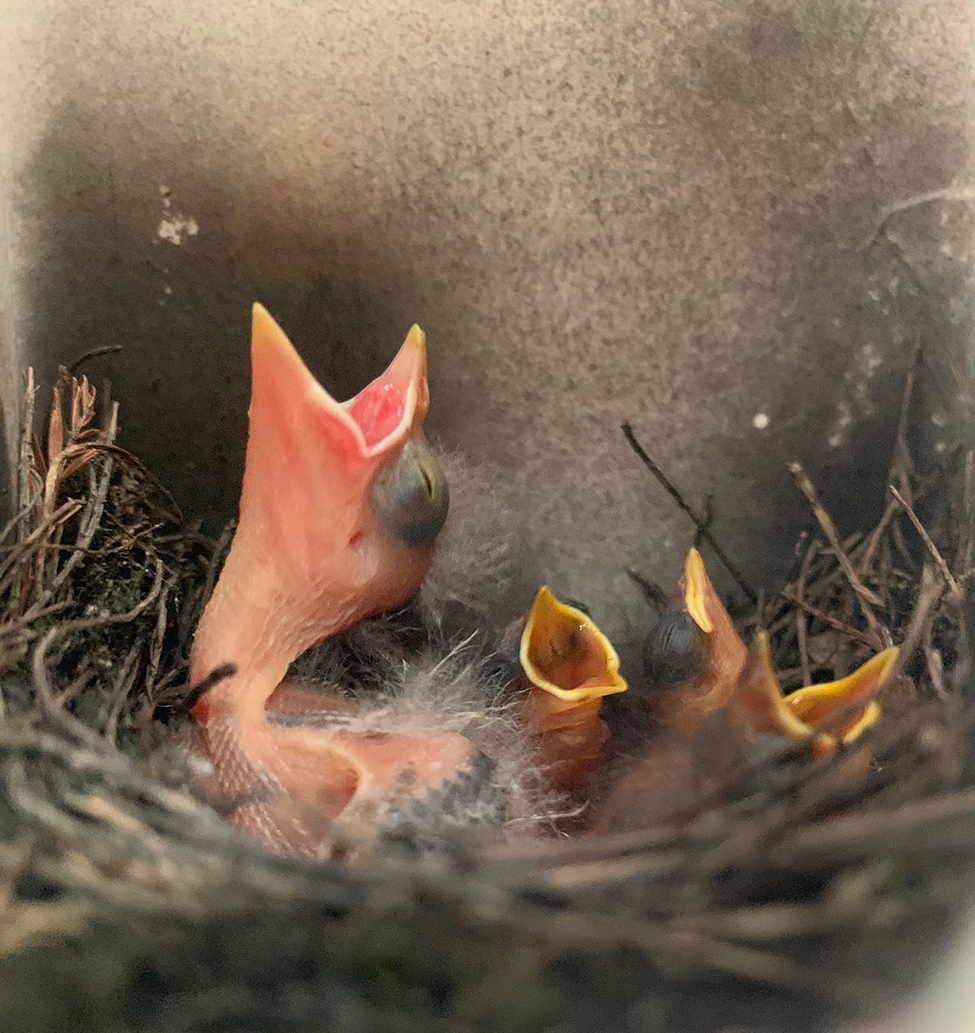 It’s probably quite obvious to anyone that has ever seen a bird’s nest that it can be quite a noisy place. For nestling birds such as these prothonotary warblers, this is by design. Parents typically return to the nest with food items that cannot be split between their offspring, and so they have to make a choice of who to feed. This choice can be overwhelming when all nestlings are begging for food, throwing their heads up in a fit, and jostling their siblings around. If this were a typical nest, a savvy parent may be able to spot the hungriest or largest nestling and choose to preferentially feed them, but this is not a typical nest. This nest has been infiltrated, and the parents may be starting to suspect, but the damage is already done. These parents have played patsy to raising another species’ baby, a brood parasite, and now it’s larger than their own offspring and more competitive when the food arrives at the nest. It certainly won’t make an already difficult job of raising a nest any easier or quieter for that matter. 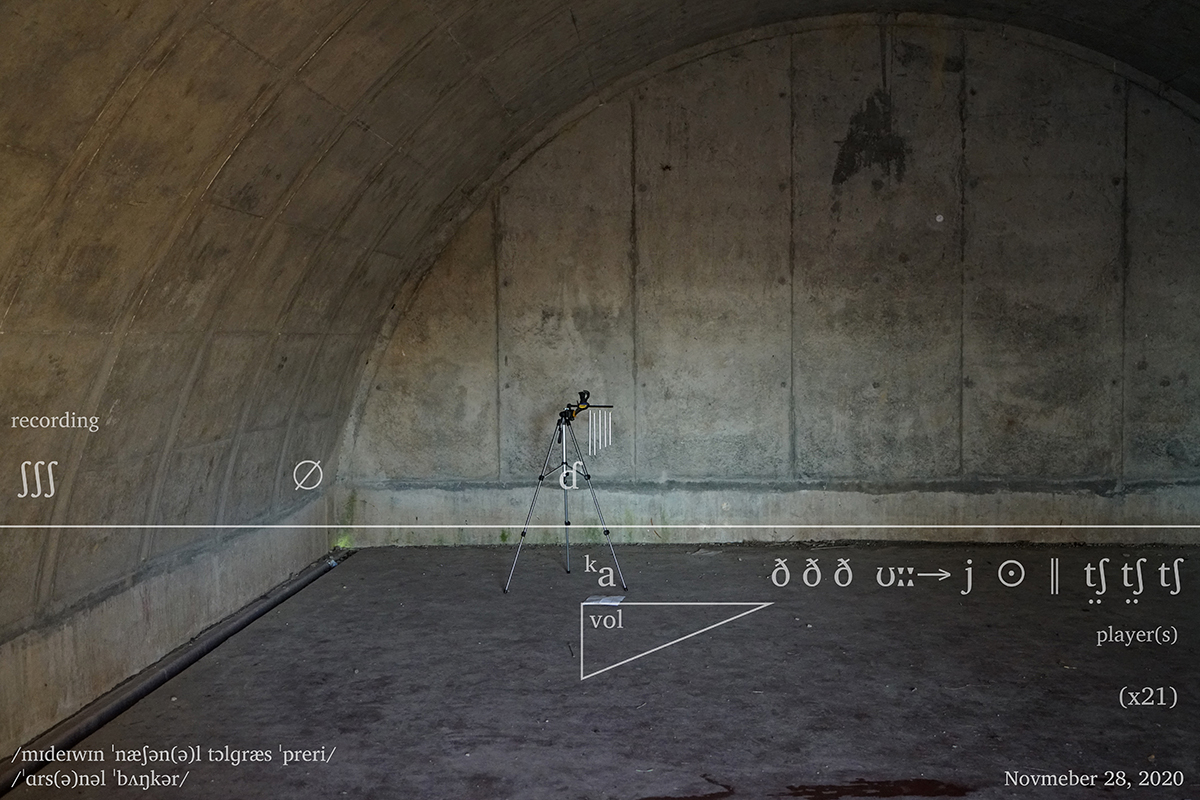 This is a mixing of phonetic and musical systems, expressed through a score and performance, for a decommissioned Army arsenal bunker. The space for this performance once housed US Army munitions from WWII through the Vietnam War. Today the bunkers are empty concrete shells embedded within the landscape and which point toward the complicated histories our built environments make present. In this score, the International Phonetic Alphabet functions as proxy for voices and is used as notes for actions and utterances to be performed. The performance of this score in the bunker fills the space with rhythmic and disembodied sounds and thereby temporarily reclaims the space and its connotations. This image is both score and visual documentation of the vocal and sound performance. The photograph is from the interior of an arsenal bunker in the Midewin National Tallgrass Prairie (Will County, Illinois) and the graphic elements are the performance score. The score was written by Adam Farcus and the performance was executed by Adam Farcus and Sarah Aziz inside this bunker on November 28, 2020.

Listen to an audio recording of the performance on SoundCloud. 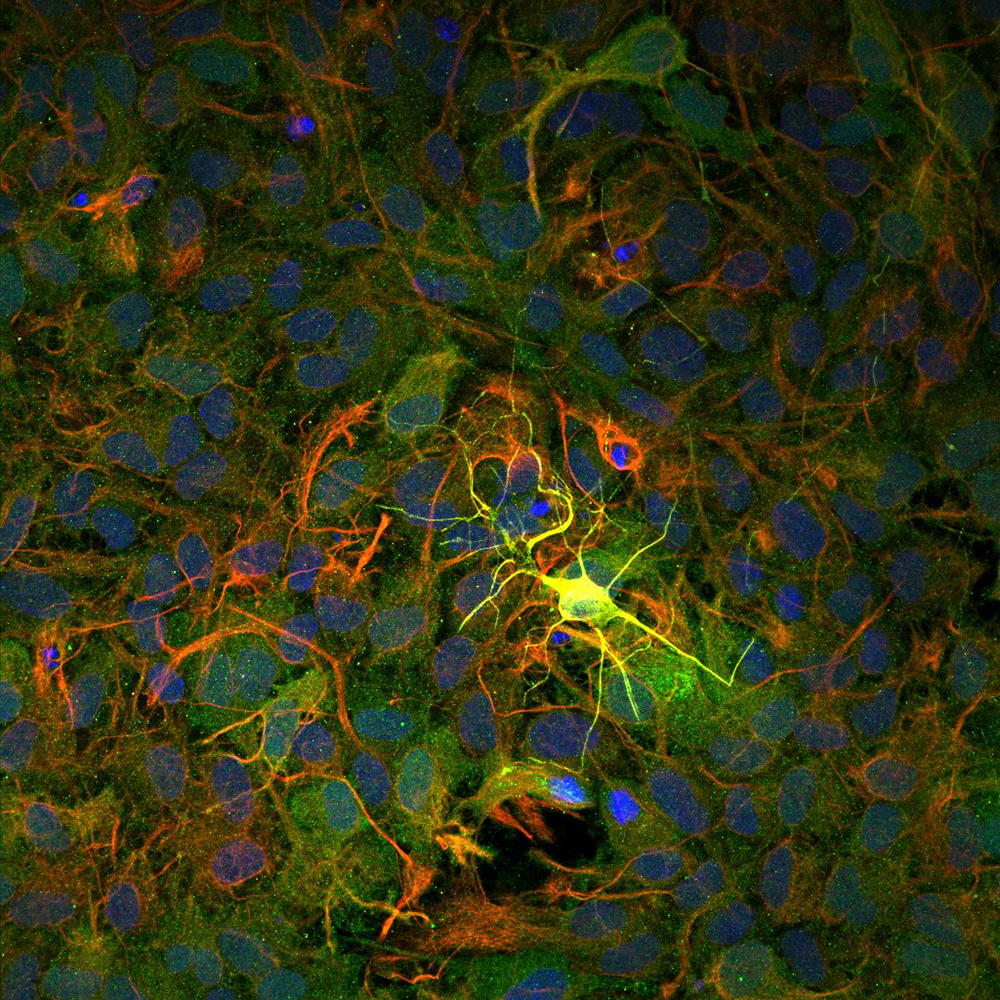 How does the single neuron look so outstanding here? Like “Stars can’t shine without darkness” by D.H. Sidebottom, the neuron would not look impressive without its surroundings. In this case, astrocytes are the surroundings, and they are more like supporting roles rather than obstacles. We know exercise can improve cognitive health, but the mechanism is still elusive. My research is to delve into links between them. One of the links to understand neurons is to observe how astrocytes behave. Astrocyte is a type of non-neuronal cell and a key component in neuronal environments to provide energy and regulate factors that can enhance neuronal functionality. Would exercise induces more proliferation and maturation of astrocytes? If so, would more energy and factors be released into neurons, and ultimately would cognitive health be enhanced? The neuron can shine because of astrocytes. Immunofluorescent image from mouse hippocampus. A single neuron is expressed in yellow and astrocytes are expressed in both red and green. However, red specifically indicates fibrillary proteins in astrocytes meaning soma and processes of astrocytes. Whereas green indicates cytoplasmic proteins meaning nuclei. Blue indicates nuclei of all cells regardless of neuronal or non-neuronal cells.

Born This Way by Elizabeth Bello from Entomology 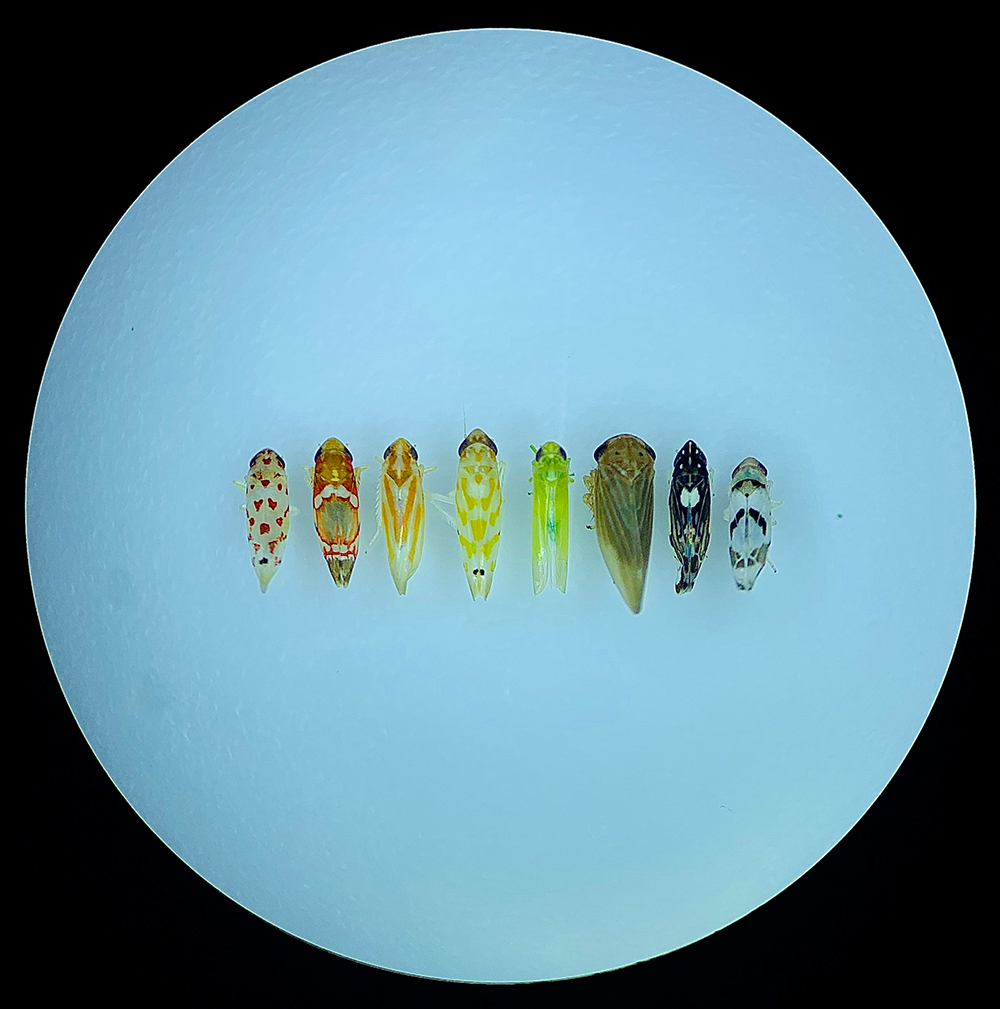 The insects shown here are leafhoppers, each one no bigger than a grain of rice. As a scientist and researcher, microscopy has always fascinated me because it draws us into a world of fine detail and vibrancy. What you can’t see here are brochosomes, tiny molecular granules, on the nanoscale, that coat the cuticle of these stunning insects. They exhibit unique properties of superhydrophobicity and omnidirectional antireflectivity. Studying these properties in brochosomes is important to understanding and designing bioinspired materials with attributes of self-cleaning and antibiofouling, useful features for sterile environments such as operating rooms. While I normally visualize brochosomes using a scanning electron microscope, I took this image under a stereoscope in support of creating a more diverse and inclusive community in science. This image celebrates the beauty of diversity and serves to voice my solidarity with people of color and members of the LGBTQ+ community in STEM.

Differences in Perspective by Isabella Rose Raynal from Political Science 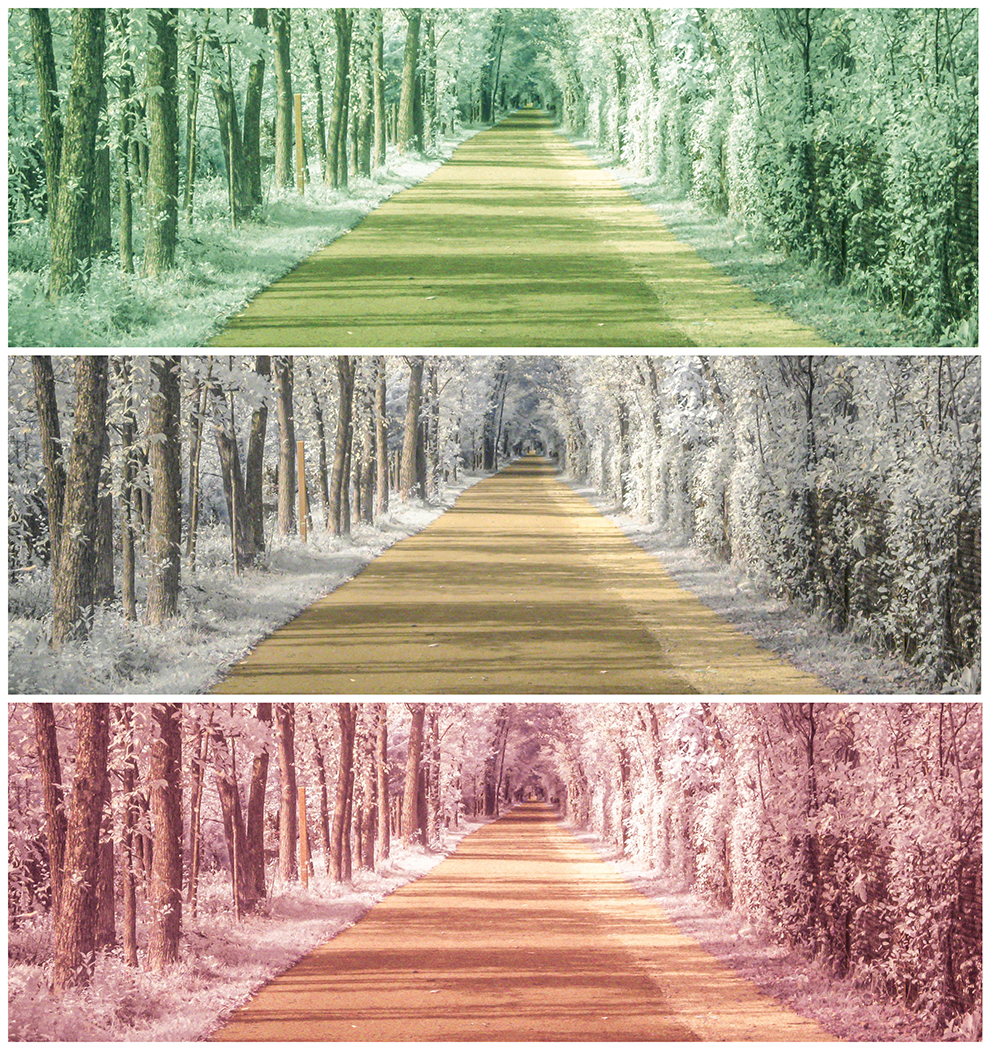 My research seeks to develop a further understanding of why and how the terms “undocumented immigrant” and “illegal immigrant” differ. This will help create a deeper understanding of two commonly used terms that have consequential effects on how the American public views unauthorized immigrants, which in turn affects immigration policy. It also may help explain how partisans think differently, which could help people understand where the other side is coming from, even if they do not agree.

Quantum Dynamics Via Path Integrals: Which Path Will the Molecule Choose? by Reshmi Dani from Chemistry 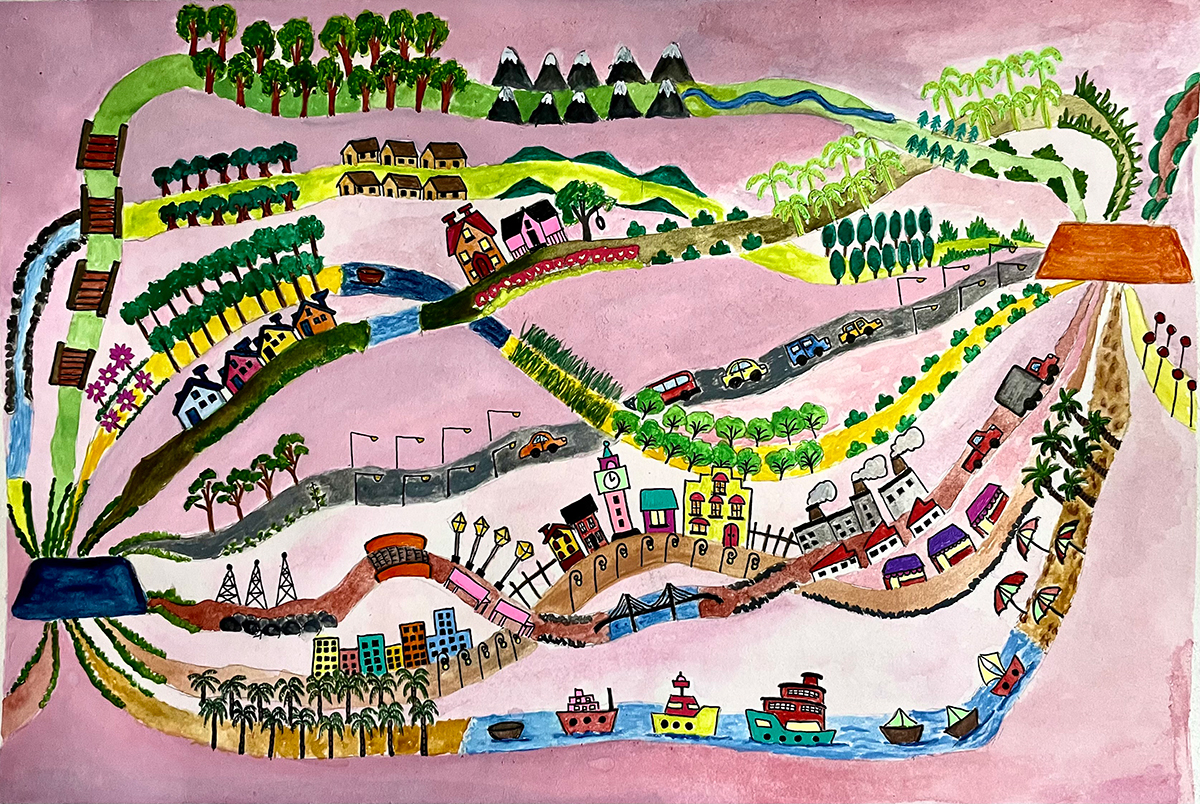 Entering the microscopic world of atoms and molecules, we turn to quantum mechanics where things become probabilistic i.e we can only calculate probabilities of a system being at a certain point in space, the well-known ‘uncertainty’. Path integrals are one formulation of quantum mechanics and my research involves studying how quantum systems evolve in time i.e the dynamics using path integrals. In this picture, I have combined two of my passions painting and quantum mechanics and we see that for a system starting at the blue to go to the orange block in time, we consider all the paths that can exist in between them. All the paths interact with the environment differently, visualized in the picture. These path integrals help us to deal with system-environment interaction rigorously and I have been using these methods to study extended systems like magnetic chains comprised of an arbitrary number of molecules quantum mechanically which is otherwise impractical to do via traditional wave function-based quantum mechanical methods. It is amusing how science mirrors life, where often we are faced with so many paths to choose from - the difference being that we can only choose one path while the atom chooses all.

Image of Research is an annual multidisciplinary competition celebrating the diversity and breadth of graduate student research at the University of Illinois at Urbana-Champaign. It is organized by the Scholarly Commons of the University Library, the Graduate College, and supported by a generous gift from the Division of Intercollegiate Athletics.

The semi-finalists were chosen by an interdisciplinary panel who judged entries on 1) connection between image, text, and research, 2) originality, and 3) visual impact.

For more details about the competition, see the Image of Research website.