Congratulations to the 2022 Image of Research Winners! 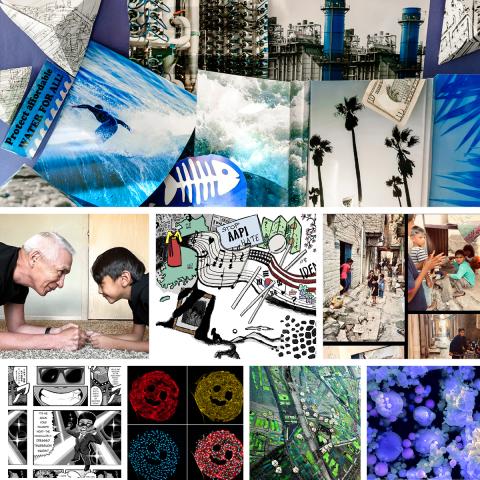 Thank you to every graduate student who entered, the semifinalists, our panel of judges, visitors to the online and on-site exhibitions, and those who voted in the People's Choice competition.

The 2022 Image of Research winners are:

Surface Tensions: Fieldwork Reflections on the Commodification of the Ocean by Brian F. O’Neill from Sociology 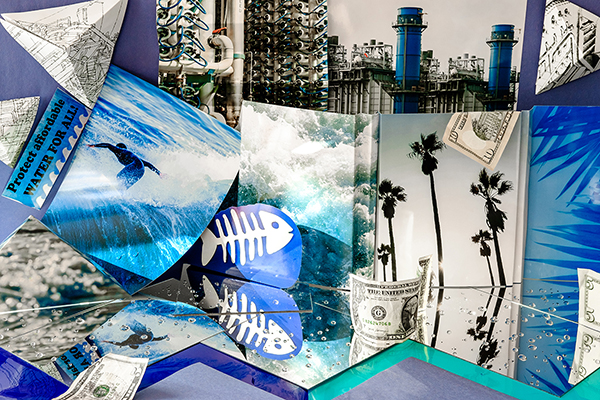 As an environmental sociologist, the key challenge of my work is to bring nature and human beings into conversation. My artistic practice has helped me dive beneath the surface tensions between social groups and our natural world. This piece was constructed out of photographs I made during one year of fieldwork in California. This image reflects the politics of seawater desalination, the process of transforming the ocean into potable water. Coastal cities must contend with the question of how to justly produce water for its growing populations in the context of climate change. Like the research process itself, I have folded and shaped my experiences to create a tableau that expresses the multiple stakes of the issue: the commodification of the ocean, recreation, tourism, technology, pollution, and social inequality in the access to water. I created this mixed media portrait with photographic gels, construction paper, water, money, archival documents, and photographic prints of my research. The materiality of water is also present, as it reflects and cuts through this pressing environmental justice issue.

Getting Older is Inevitable, Aging is Optional by Madina Khamzina from Community Health 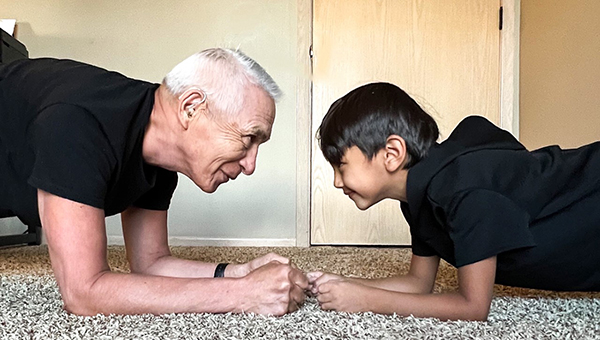 As Dr. Christiane Northrup says, “Getting older is inevitable, aging is optional”. The world’s population of people aged 60 years and older is growing rapidly meaning that people worldwide are living longer. But does longer always mean happier and healthier? Since by the time people reach age 65 approximately 2 in 5 adults in this age have a disability. My research aims to deepen our understanding of successful aging from the lenses of physical activity, social engagement in the presence of a disability. Through comprehensive literature review, national data analysis, and older adults’ perceptions evaluation I am trying to explore the impact of social engagement (e.g. attending clubs, volunteering, engaging with grandchildren) and physical activity (e.g. gardening, walking, hiking) on successful aging (measured via life satisfaction, well-being). This photo captures all three components of my research. My dad (70 years old) often competes with his grandson (6 years old) on who can hold the plank longer. They not only inspire each other but also maintain the warmest granddad-grandson relationship, which according to my dad, keeps him feeling good, happy, and young.

The Identity Conflict: Lifelong Journey of a Korean Adoptee by Kirby Cook from Communications and Media 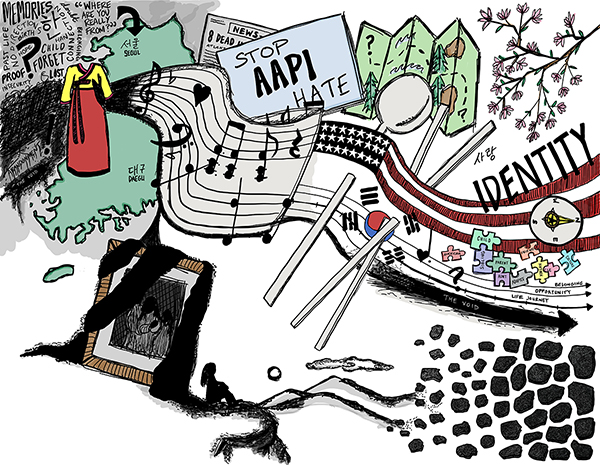 Art and qualitative research come together in this depiction of a lifelong identity journey for Korean adoptees. Beyond the boundaries of prescribed methods, data collection, and formulaic approaches, this collage represents the abstract complexities of research and what lies beyond charts and tables. How does one capture the essence of an individual’s personal history; their pain, their future? While my research focuses primarily on material items belonging to Korean adoptees and their meanings, I recognize that there is more behind their stories. Each adoptee may experience the effects of their adoption and/or connection to their heritage culture differently, and there is no “one size fits all” approach to identity journeys. Often rooted in deeply ingrained emotions, personal identity is a central concern particularly for adoptees scarred by their unknown past. With limited knowledge of their birth or little to no exposure to their native culture, adoptees may feel at odds with their identity throughout their lives; however, these struggles can equally inspire them to seek new opportunities for growth and self exploration. 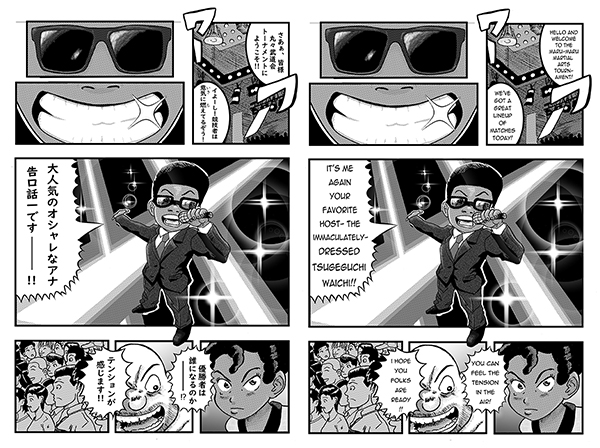 I draw manga, which I have studied in Japan and produce in English and Japanese. I aim to increase Black representation in the form and teach workshops on manga and Japanese storytelling. Using the university as a platform, my events and classes are open to the community. I am designing a manga production course for UIUC which will be the first of its kind in the United-States.

My current project is a bilingual manga that imagines Black potential in a world where race doesn’t exist. Azuki is about a little girl who is a Rock, Paper, Scissors champion. Pitted against a cast of tough, male opponents, Azuki only plays scissors, but always wins – speculating Black girl magic in a world without impediments as the universe bends toward her will. Azuki imagines a Black character at once in a conspicuously Japanese setting, and an ambiguous anational space – combining the cultural transnationalism of the Black manga movement with the concept of a borderless society and a world of humans unimpeded by the construct of race. The plot’s absurdity is a reminder that these ideals are still a fantasy and there is work to be done in establishing bridges and abolishing systems. 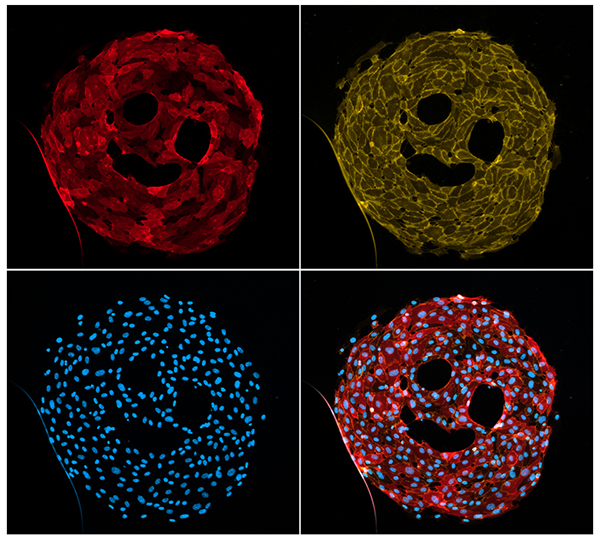 Emotions are how human’s express responses to stimuli from all around us. Turns out our cells are not so different, except instead of emotions they produce a myriad of proteins and other biomolecules. Scientists refer to the relative expression profiles of a cell’s proteins and other biomolecules as “phenotypes,” and a cell’s phenotype can be just as complicated as a person’s emotions.

Emotions are usually caused by numerous underlying experiences or feelings that enhance or minimize each other. Cell phenotypes are very similar. The cells in our bodies are constantly reacting to stimuli, often multiple things at once. In my research, I use a technology called cellular microarrays to try to understand cell phenotypes. This technology lets me manipulate a cell’s microenvironment in precise, defined ways to determine what causes a cell’s phenotype to change. Then I take pictures of how the cells respond. In this photo, the different colors represent some different proteins expressed by liver sinusoidal endothelial cells, with red as LYVE-1, yellow as CD-31, and cell nuclei in blue. They’re all combined in the bottom right for a phenotype cell-fie. I like to pretend that my cells smile for their pictures, and sometimes they really do.

Mapping the Hurt by Apharna Padmakumar from Urbana and Regional Planning 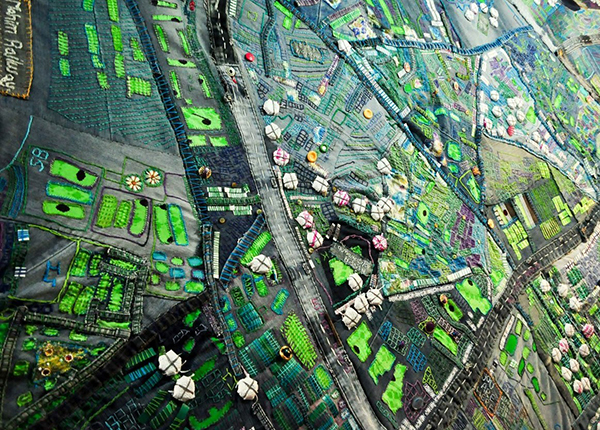 The artwork here presents an innovative visualization of gender-based violence in Dharavi, Mumbai – Asia's biggest slum. It was made of scrap denim pieces and found objects on a map with a visual record of the experiences the residents have faced. This activity was part of a workshop conducted by an NGO to reflect on violence against women wherein they used embroidery and applique to patch pieces together which resulted in an embroidered quilt of connected stories.

One of the victims who sewed her story into an artwork helped her convey these incidents which are still seen as a social taboo and feeling a little bit more confident talking about these experiences that scarred them in some ways.

The intersectional perspective here signifies violence against a particular gender of a social system that curtails the basic human rights of women and girls. The issue is so deeply embedded in their everyday life experiences that it is almost overlooked/underlined. The intersectional lens here underscores how such violence shapes these urban spaces and gender relations ensuring that the struggle for justice and equity among women no matter where or to what degree, continues to be rooted in everyday life.

Ash is NOT Trash: Small Things Have Huge Benefits by Hongxu Zhou from Agricultural and Biological Engineering 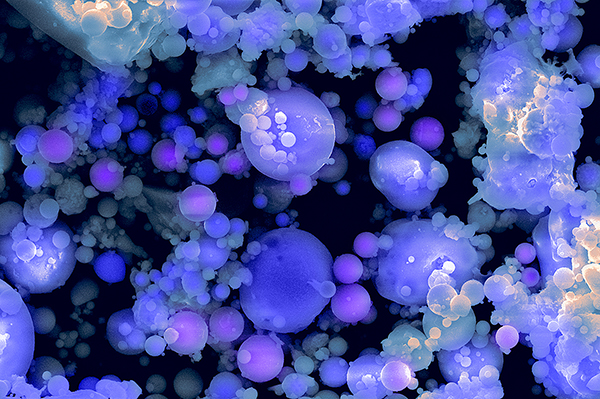 Waste pollution is a planetary threat, so far away yet so close. Ideally, we wish for zero waste. However, only one-third of the generated waste is recycled in the USA. Being ash is the most common terminal for waste. This image shows the fascinating visual impact of coal ash on a micro-scale. Illinois is one of the nation’s largest producers of coal and coal ash. Although Illinois is poised to become the first state in the Midwest to ban coal-burning power plants, historic coal ash raises concerns at Illinois coal plant sites. As a graduate student and resident in Illinois, my research is expected to shed light on excavating the full potential of ash resources, minimizing ash risks, and turning ash into treasure. We are dedicated to identifying ash value components and establishing the links between critical elements and the potential for maximum benefits. The ash values we discovered so far will help remove dissolved phosphorus from agricultural runoff to combat eutrophication. Beyond this image, we hope to deliver the message: we are on the road to achieving sustainable development - digging into small things will have huge benefits that the ash is not trash but a potential treasure.

The Silver Lining by Fiz Hassan from Architecture 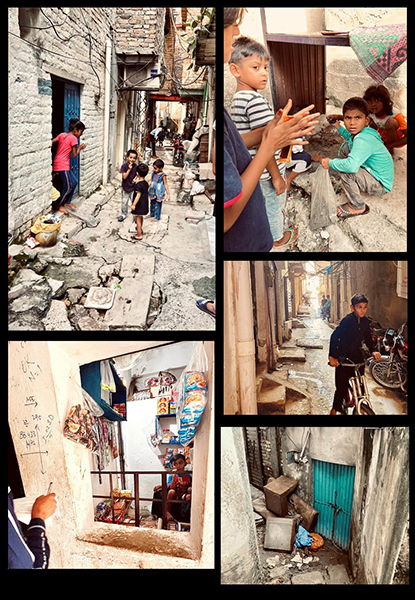 Amid the thriving, contemporary urban capital of Pakistan, exists a dense 41,000 sq. mile squatter settlement, housing over 10,000 Christian minority residents. To me, what appeared to be a dividing wall concealing few old houses, turned out to be a deeply embedded and neglected community, independently fighting their own battles for equitable healthcare, education, flood mitigation, and basic human rights.

The evident disparity motivated me to conduct research with Professor Yun Kyu Yi to analyze the region’s energy performance metrics and evaluate the overall impact of the surrounding on its residents. With several fruitful interactions with the slum inhabitants, a common concern that surfaced was the need of a decent upbringing for their children who at this point, were aloof to the magnanimity of challenges that await them.

While walking the sloping tight streets and talking to strangers who randomly offered me food during my afternoon visits, I was comforted to see the innocence, agility, and cheerfulness of children still intact over what little they shared. A strong sense of ownership, bond, and connection was evident, hinting at a silver lining of future revival, perhaps through the productive cultivation of its youth.

Image of Research is an annual multidisciplinary competition celebrating the diversity and breadth of graduate student research at the University of Illinois at Urbana-Champaign. It is organized by the Scholarly Commons of the University Library and the Graduate College. The 2022 competitions (graduate and undergraduate) are supported by a gift to the Scholarly Commons from Mrs. Mardell J. O’Brien.

The semi-finalists were chosen by an interdisciplinary panel who judged entries on 1) connection between image, text, and research, 2) originality, and 3) visual impact.

For more details about the competition, see the Image of Research website.