Following the Sounds of Prairie Cicadas 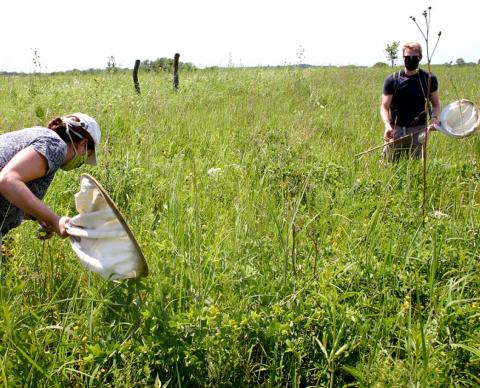 OUTSIDE LODA, Ill. – When I arrive at the Loda Cemetery Prairie Nature Preserve, Katie Dana is already out there. She’s wearing knee-high boots to ward off chiggers and ticks, and she’s carrying an insect net. Dana is on the prowl for cicadas: the loudest insects on the planet. On this hot summer day, they do not disappoint. The males are in full chorus.

I wade out into the vegetation to meet her and she walks us to a spot toward the center of this 12-acre prairie. She gestures toward a row of conifers that mark the cemetery boundary. This part of the prairie, the part closest to the cemetery, is ancient, she says. It was never plowed under to make way for crops. The rest has been restored. The ancient part looks thicker and has more prairie dock, with its giant spadelike leaves stretching up to the sky.

The prairie stretches downhill from the cemetery to the edge of a soybean field. Beyond the soybeans – Dana points to a railroad berm less than a mile away – is more cicada habitat. Do those cicadas come over to this prairie? Or does the soybean field act as a barrier that stops these populations from merging? And how long do these cicadas spend underground before emerging? Those are some of the many questions Dana wants to answer.

Loda Cemetery Prairie is one of more than two dozen sites Dana is visiting this summer. She is a scientific specialist in entomology for the Illinois Natural History Survey. Her task is to capture more than 20 individual cicadas at each locale across the state, identify the species, collect a bit of their DNA, save a representative pair of each species and, later, study their DNA. She also has some fun side projects on her plate. She likes to record the songs of each male she captures, to one day discover if different populations of the same species are developing their own “dialects” in different parts of the state.

Dana has been collecting cicadas in Illinois since 2013. In the process, she’s learned to differentiate their calls. “The dog-day cicadas, usually you start hearing them around the Fourth of July,” she tells me. “The itty-bitty grass cicadas sound like dry grass blowing in the wind. And from a distance, the green-winged cicadas make a thrumming noise that sounds like a sprinkler on a hot summer day.” The call of the grass cicada, Cicadettana calliope, is so high-pitched that some people have trouble hearing it. “I can still hear them out of my right ear,” Dana says. One of the species here she is after, Megatibicen dorsatus, the giant grassland cicada, is thought to rattle like an old tractor, she says.

Of the 21 species of cicada in Illinois, M. dorsatus is by far the most ornate, with yellow, red, black and white markings along its back. Dana inches toward one loud male clinging to a flower stalk and stealthily plucks it from its perch. The insect complains. I can see it in her hand, but the buzzing seems to be coming from somewhere else. I look to my left and behind me. She assures me this is the guy making all the racket. She can feel the vibration between her fingers.

“How do they make that noise?” I ask. She holds the cicada with its underside up and points to the creature’s tymbals, two sets of membrane-covered ribs that vibrate 300-400 times per second. Because it’s singing, and it has tymbals, this is obviously a male. Dana uses her ability to identify cicadas by their songs to save her time and effort.

“One of the things I do is drive down the road with my window down and just listen,” she says. If she hears cicadas, particularly if she hears something that sounds rare or unusual, she’ll apply for a permit to come back and study that locale. On a recent trip to a roadside prairie north of Kankakee, she did a quick audio survey from her car and thought she heard Okanagana balli, a small prairie cicada, which is rare in Illinois. She plans to go back to investigate. Earlier in the summer, she found this same species at a cemetery prairie northeast of Bloomington. Land managers in the area had no idea it was there.

Another part of her cicada sleuthing involves going on Snapchat, looking at maps and then viewing recent videos from the areas of interest. “I can hear what cicadas are calling in the background of a barbecue video or whatever,” she says. “That’s a good way to figure out when the cicadas are coming out without having to, like, drive all the way down to southern Illinois.”

Entomology graduate student Jon Tetlie arrives to help Dana hunt for cicadas. They swoop at the insects with their nets and then place them in canisters for later processing. Once they’ve captured about 21 cicadas, they retreat to an observation deck tucked into a corner of the prairie. Dana puts the bugs in a wire-mesh cage. Then she uses alcohol to carefully flame-sterilize more than a dozen pairs of scissors. One by one, she picks out the cicadas to record their traits and collect their DNA. When she picks up the scissors, I ask her what she’s cutting. “I’m cutting off the leg,” she says with a smile. “They have five more.”

The leg is beefy enough that she doesn’t have to kill the whole insect to collect its DNA, she says. She puts the female legs in pink tubes and the males in blue, just to keep them sorted. When she’s finished, she lets the cicadas go. Each one hightails it to the prairie. She lets me release one. Tetlie tells me to toss it like a paper airplane. It works: The cicada flies off with a loud buzz.

I ask Dana why she studies these creatures and she tells me about when she first arrived in Illinois from her home state of California. “I stepped out of the car and it felt like an alien world. The number of cicadas calling, it was just so loud,” she says. “And their lifecycle is so interesting. The fact that some of them spend up to 21 years underground before coming up. It’s incredible. And they’re taking this really low-nutrient food source from plant roots and using it to grow into these really large insects, which also makes them a great food source for a bunch of different animals.”

Birds, snakes, spiders and even some people eat them. In a recent study, Dana and her colleague, INHS conservation biologist Mark Davis, found that gorging on the 17-year cicadas helped copperhead snakes recover after a multiyear drought in a forest near Meriden, Connecticut effectively shut down snake reproduction.

The work also informs state conservation efforts. “We’ve seen a decline in insectivorous birds over the past few decades,” Dana says. “So, making sure that we maintain populations of these large-biomass organisms that could potentially help our insectivorous birds, it’s really important. “I also just find them very charismatic,” she says. “They are the soundtrack of summer, and because we have different species throughout the state, the song changes through time and from place to place.”

Photo caption: Dana and Tetlie stand in the tall prairie vegetation, which they inspect closely. Each carries a white canvas net.

Reposted from the Illinois News Bureau (September 24, 2020). The article has photos of researchers in the field and sounds of the cicada.

The Grand Prairie Friends conservation organization owns and manages Loda Cemetery Prairie Nature Preserve. The INHS is a division of the Prairie Research Institute at the University of Illinois, Urbana-Champaign.

Subscribe to Behind the Scenes for short blog posts, photos and videos from Illinois faculty, researchers, students and staff about their work and lives. Send an email with “SUBSCRIBE BTS” in the subject line.