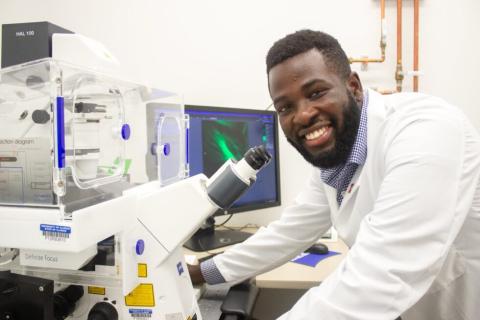 As an undergraduate student, Arogundade initially intended to apply for medical school; however, a summer research experience at Hamline University would change his mind. At first, his study of photonic crystals, nano-fabricated materials that are made using laser light-beams, was directed towards improving the efficiency of solar cells.

Later, Arogundade would pivot his research towards spectroscopy with the goal of using the nanomaterials as biosensors and became fascinated with the interface of technology and engineering in a biological context.

When he met Andrew Smith, professor of bioengineering, at the University of Illinois, Arogundade knew that he had found the right lab and graduate experience to build up his knowledge of tissue and cancer biology.

“One of the things that drew me to Illinois and to Dr. Smith’s lab was the chance to explore different opportunities. I was still interested in medical technology, but I realized that I could pursue those interests without becoming a physician,” Arogundade said.

Arogundade has since focused his own research projects on improving the penetration of quantum dots, a type of nanoparticle, for 3D imaging. Most high-resolution tissue images are obtained from thinly sliced tissue, but these generate 2D images, which lack the complexity of 3D images. Other imaging modalities such as MRI and CAT scans can produce 3D images, but often sacrifice high resolutions that can be obtained with 2D fluorescent imaging or microscopy.

“My goal is to try to bridge that resolution gap by imaging whole tissues. The problem is that light doesn’t penetrate 3D tissue very well, and we are trying to address this using our quantum dots, which are bigger than dyes but have a narrower emission,” Arogundade said.
A narrower emission enables the quantum dots to multiplex, which means they can image many specific targets at the same time to provide the researcher with a very clear, holistic image. Quantum dots are a type of fluorophore or contrast agent, so when a microscope shines a light on these dots, they reflect that light back at specific wavelengths.

Quantum dots also have a notable advantage over other types of fluorophores, which are subject to a phenomenon known as photobleaching. That is, other fluorophores quickly stop emitting light, whereas quantum dots will continue to collect and reflect light for much longer periods of time.

As a TiME program trainee, Arogundade is a member of a community of graduate students who concentrate on the tissue microenvironment through different disciplines and areas of expertise. Arogundade’s current focus is on adipose tissue, which has a strong correlation to breast cancer progression in women.

“My goal is to get a better understanding of how cancer progresses and what factors influence that progression. Knowing this, we could develop better therapies and preventions, leading to improved prognoses for patients,” Arogundade said.

Written and originally published by the CCIL Communications Team.

The Tissue Microenvironment (TiME) program is a university-wide training program for graduate students, supported by a T32 grant from the National Institutes of Health. Click here to find out more.