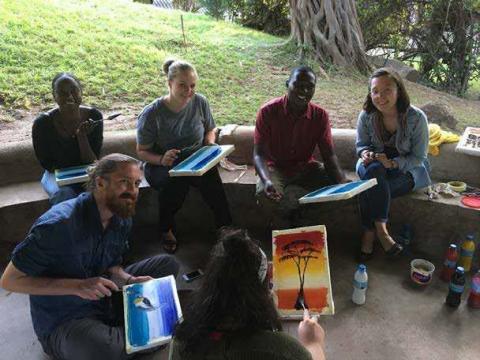 Two students from University of Illinois at Urbana-Champaign spent the summer studying Swahili in Arusha, Tanzania as awardees of the 2017 U.S. Department of State Critical Language Scholarship:
For eight weeks, these students and 26 other American students from institutions across the United States participated in intensive Swahili courses at the MS Training Centre for Development Cooperation (MS-TCDC) in Arusha, a diverse, sprawling city of over 400,000 people located at the foot of the dormant volcano Mount Meru in northern Tanzania.
CLS program participants lived with local Swahili-speaking host families and met regularly with local peers to learn more about the Swahili language and develop their personal networks. The group engaged in cultural excursions, lectures and other enrichment activities designed to support and enhance language learning and exposure to the host culture.
During one activity this summer, many CLS students participated in a painting lesson with local artists. The artists taught students about the types of paints and supplies they use and emonstrated how canvas and frames are made from scratch. Students then had the opportunity to paint their own canvas using a popular style of Tanzanian painting that uses knife brushes.
Swahili, often referred to as Kiswahili, is the national language of Tanzania, Uganda, Kenya, and the Democratic Republic of Congo and the lingua franca for as many as 150 million people in Central and East Africa. It is also one of the official languages of the African Union and the East African Community. For centuries, Swahili has been a key language of trade and culture across East Africa and continues today to be the key language for some of the fastest growing countries in the world. Today African languages, especially regional languages like Swahili, are more in demand than ever before as international businesses look to expand into the African market.
The CLS Program runs every summer and is open to American students at colleges and universities. Applications for the 2018 CLS program are available at http://www.clscholarship.org. Applications are due November 15, 2017.
What is the CLS Program?
The CLS program is part of a U.S. government effort to expand the number of Americans studying and mastering critical foreign languages. CLS scholars gain critical language and cultural skills in languages that are less commonly taught in U.S. schools, but are essential for America’s engagement with the world, contributing to U.S. economic competitiveness and national security.
In 2017, 555 American students representing 217 colleges and universities across the United States were competitively selected from over 5,000 applicants to receive a CLS award. Each CLS scholar spends eight to ten weeks in one of 22 locations studying Arabic, Azerbaijani, Bangla, Chinese, Hindi, Indonesian, Japanese, Korean, Persian, Punjabi, Russian, Swahili, Turkish, or Urdu.
The program provides funded, group-based intensive language instruction and structured cultural enrichment experiences designed to promote rapid language gains. CLS scholars serve as citizen ambassadors, representing the diversity of the United States abroad and building lasting relationships with people in their host countries.
They are expected to continue their language study beyond the scholarship and apply their critical language skills in their future careers. For further information about the Critical Language Scholarship or other exchange programs offered by the U.S. Department of State’s Bureau of Educational and Cultural Affairs, please contact ECA-Press@state.gov and visit our websites at http://www.clscholarship.org/ and https://studyabroad.state.gov/.