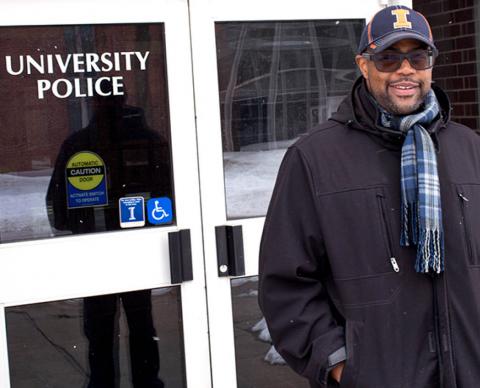 An experienced student engagement director and recent interim assistant director of the Bruce D. Nesbitt African American Cultural Center, Dementro Powell has started in a new role as the Director of Community Development and Engagement at the University of Illinois Police Department (UIPD).

Doctoral student in Education Policy, Organization & Leadership (EPOL), Dementro Powell has been known around campus as “Mr. RSO” for his work in student engagement through the university’s registered student organization office and for his involvement in coordinating large scale student events and programming. This week, Powell started in his new role at the Division of Public Safety, where he will be tasked with building new relationships between police officers and community members and encouraging constructive conversations to promote equity and inclusivity.

“I envision a community where students, staff, police officers, and civilians are more engaged in each other’s lives with a genuine interest of learning what each other are doing while supporting one another in their endeavors,” Powell said. “This would be by way of working on programs together, engaging in dialogue meant to enhance our understanding of one another, and hopefully revisiting the ‘why’ of it all.”

The Director of Community Development and Engagement is a brand new position at the UIPD, and it marks the beginning of a heightened effort to engage with and listen to interests, concerns and suggestions from community members.

Powell said the programming he will be working on will include strengthening relationships with campus cultural houses, having officers interacting more with student organizations as mentors and advisors, creating dynamic and fun opportunities to engage with athletes, fraternities and sororities, and staff. He said he has already been in conversations with some of the student groups he had been advising, and he plans to reach out to more campus groups in the coming weeks.

Powell hopes to promote a mutual understanding between police officers and members of the community, with a focus on engaging with Black and Brown students and staff.

“I would like to develop effective conversations where people representing both sides of the coin, be it police or civilians are actually listening to one another to begin healing and working towards the common goal of being a proactive and inclusive community,” Powell said.

Photo of Dementro Powell standing in front of the University of Illinois Public Safety Building on Feb. 17, 2021. Powell started in his new role this week as the Director of Community Development and Engagement at the Division of Public Safety, where he is tasked with promoting a mutual understanding and constructive dialogue between police officers and community members.