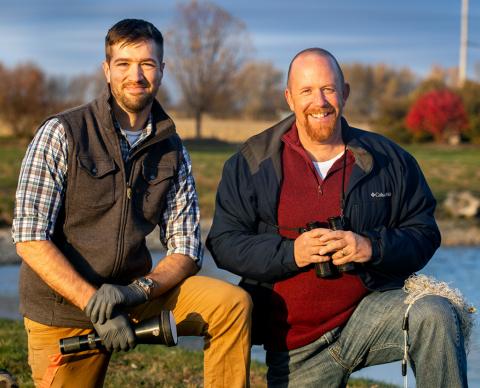 CHAMPAIGN, Ill. — From mid-November 2015 through February 2016, scientists used GPS transmitters to track the movements of Canada geese near Midway International Airport in Chicago. They discovered that – in the colder months, at least – some geese are hanging out on rooftops, in a rail yard and in a canal close to Midway’s runways. This behavior increases the danger of collisions between geese and airplanes, the researchers say.

The study is reported in the journal Human-Wildlife Interactions.

The Federal Aviation Administration recommends that – depending on the type of aircraft served – airports maintain a 5,000- to 10,000-foot buffer around runways that is free from wildlife attractants. But the study revealed that the geese are using man-made structures inside the buffer zone at Midway Airport.

The researchers placed neck-collar-mounted GPS transmitters on 31 geese captured in parks from within a 7.5-mile zone around Midway Airport. The team collected hourly data on each bird’s altitude and position over four months.

Study lead author Ryan Askren, a graduate student at the University of Illinois, said it was important to follow the birds’ precise movements from site to site.

“We knew there were lots of geese around the airport, and we had an idea of what habitats they were using,” he said. But knowing how the birds moved – and at what altitude while in proximity to runways – was critical to understanding the risk to airplanes.

“What we didn’t understand before we started looking into it is that the geese are acting very oddly,” said Michael P. Ward, a U. of I. professor of natural resources and environmental sciences and Illinois Natural History Survey avian ecologist who led the research. “Their behavior is different than what most wildlife biologists would think of as typical for geese.”

Early in this study, co-author Brett Dorak, a graduate student in Ward’s lab at the time, used transmitters to track Canada geese using rooftops and rail yards in the vicinity of the airport. He found that some of the geese visited those sites quite often. Flight paths of the geese traveling between these locales and parks and other open spaces nearby showed that the geese were often crossing the runway approaches.

“Of the 3,008 goose movements we recorded, 821 came within 10,000 feet of airport runways,” Askren said. “Of those, 399 intersected the flight paths of approaching and landing aircraft.”

“I think the geese are on the rooftops because they don’t want to be disturbed,” Ward said. “No one’s jogging past them, no cars are honking at them. They can sit up there and conserve energy and not move. I think their whole behavior is to conserve energy, since there isn’t much for them to eat in Chicago in the winter.”

The canal doesn’t freeze and is a bit warmer than other open water, so it offers another opportunity for the geese to avoid expending too much energy, Ward said.

What little sustenance is available to them might be found in the rail yard, the researchers said. Photos taken by Dorak revealed what look like piles of moldy grain in one section of the rail yard.

“They won’t let us in there, but it looks like these rail cars haul grain and then they don’t get all of the grain out,” Ward said. “They take the rail cars to one end of the yard and somebody brushes them all out and it makes these mountains of moldy grain.”

Some of the study geese regularly visited the rail yard and were likely eating the grain, Ward said.

“These geese are using clever behaviors to find whatever resources they can get,” he said. “It just doesn’t make sense physiologically that they are going to make it through the winter eating dead grass, and so they’ve got to be creative.”

While the study focused on geese near Midway Airport, Ward said he thinks the findings are broadly relevant.

“The behavior of the geese at Chicago is going to be similar to the geese around airports in Toronto, Minneapolis, Madison or Des Moines – any airport in the upper temperate region,” he said. “Wherever you go, these geese are adapting to humans and changing their behaviors to take advantage of any opportunities they have.”

The researchers suggest that owners of buildings near the airport set up devices to dissuade geese from using rooftops. They hope that rail yard managers will find another way to dispose of grain, and that those managing lands near the canal will find ways to scare off the geese.

“Make it so it’s not a hospitable place for the geese,” Ward said. “I realize the geese will probably cause a problem somewhere else, but they won’t be causing a problem for airplanes.”

The researchers are working with the U.S. Department of Agriculture Wildlife Services program to alter goose habitats to reduce the risk to air traffic.

The paper “Tracking Canada geese near airports: Using spatial data to better inform management” is available online and from the U. of I. News Bureau.