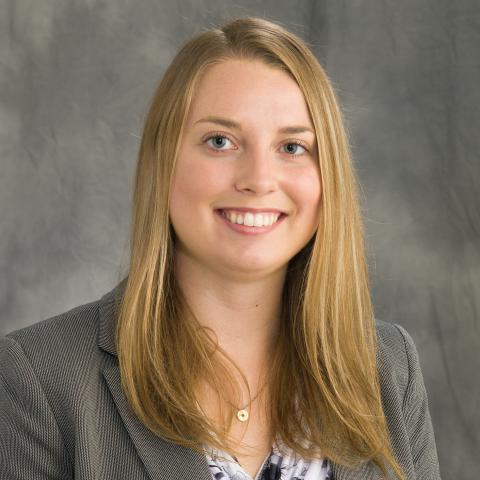 The Graduate College is pleased to announce Elizabeth Neumann, a doctoral student in Chemistry, as the winner of the fifth annual Graduate Student Leadership Award.

A strong advocate for addressing gender-based discrimination and sexual harassment in the sciences, Neumann has inspired several initiatives within the Department of Chemistry. Her efforts contributed to the creation of a departmental climate survey as well as the formation of a departmental climate committee that is comprised of graduate students, faculty, postdocs, and staff. The committee works to raise awareness of sexual harassment and to provide education on proactive topics such as bystander intervention. Neumann’s leadership on these issues also led to the creation of a workshop for new graduate students, which is now integrated in the department’s first-year course, Professional Development for Chemists.  A corresponding third-year workshop is currently being developed to explore the topic in more depth after students begin work in research labs.

Neumann’s recommenders spoke of her scientific work, her compassion, and her commitment to social justice. One recommender said, “I have had the privilege of working with an excellent and experienced scientist who merges in one person a rare and awe-inspiring combination of scientific, social justice, and diplomatic skills, and who is a truly magnificent human being.”

Katharine Lee, a doctoral student in Anthropology, is recognized for collaborating on equity research leading to policy changes in national organizations and promoting science communication as a founding member of 21st Century Scientists.

Graduate College Dean Wojtek Chodzko-Zajko observed, “The nominee pool in this year’s competition was truly extraordinary. The graduate students who were nominated exhibit some of the most admirable qualities found in the very best scholars and scientists. They are passionate, persistent, and highly motivated. These characteristics lead them to become engaged in public service for the good of our campus and the community.  We are proud of all of the applicants and, in particular, we congratulate Elizabeth for her dedication, courage, and commitment.”

The Graduate Student Leadership Award is sponsored by The Graduate College and its student advisory group, SAGE (Students Advising on Graduate Education). Begun in 2015, the award was created to recognize graduate students who have exhibited outstanding service that has positively impacted the campus or wider Urbana-Champaign community.

For more information about the Graduate Student Leadership Award, visit the Graduate College website at https://grad.illinois.edu/current/student-leadership-award.