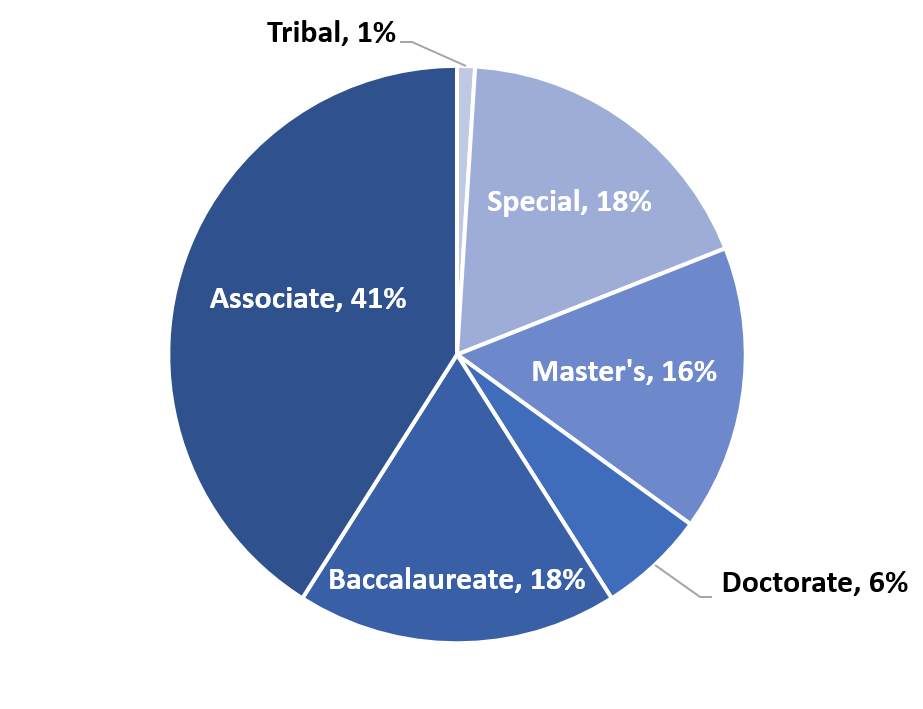 Percentage of institution types within U.S. higher education (based on data from the Carnegie Classification of Institutions of Higher Education, 2010).

Also called community colleges and two-year colleges, this category includes institutions where over 90% of degrees conferred are at the associate’s degree level or lower. These institutions also frequently offer lower level undergraduate courses for transfer to four-year institutions. For additional information on associate’s colleges, see:

Also commonly called liberal arts colleges, institutions fall into this category if bachelor’s degrees accounted for at least 10 percent of all undergraduate degrees and the institution awarded fewer than 50 master’s degrees in an academic year. To learn more:

This category includes institutions that awarded at least 20 (research) doctorates during the academic year, not including most professional degrees (e.g. JD, MD, PharmD, AudD). Within the Carnegie Classifications, doctoral-granting institutions are further subdivided based on research activity.

This category includes institutions that awarded at least 50 master’s degrees during the academic year, but fewer than 20 doctoral degrees. Some resources on these institutions include:

These are institutions awarding bachelor’s degrees or higher where 75% or more of the degrees are in a single field or set of related fields (e.g. medical school, seminary, art, music, law). Examples of special focus institutions include the New England Conservatory of Music, Rose-Hulman Institute of Technology, John Marshall Law School, and the Culinary Institute of America.

These are defined as members of the American Indian Higher Education Consortium.